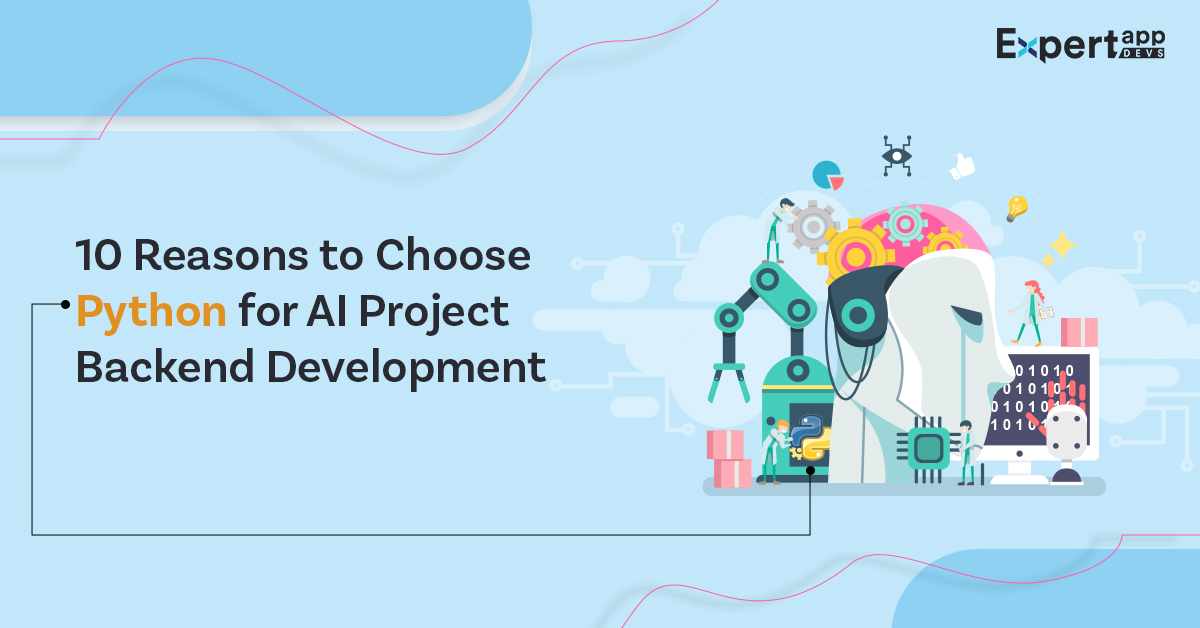 When you are developing a web app or a mobile app, choosing the right backend language is vital thing.

You might need clarification about the backend development. So, let me simplify it.

When you develop any web or mobile app, they are built from two parts: 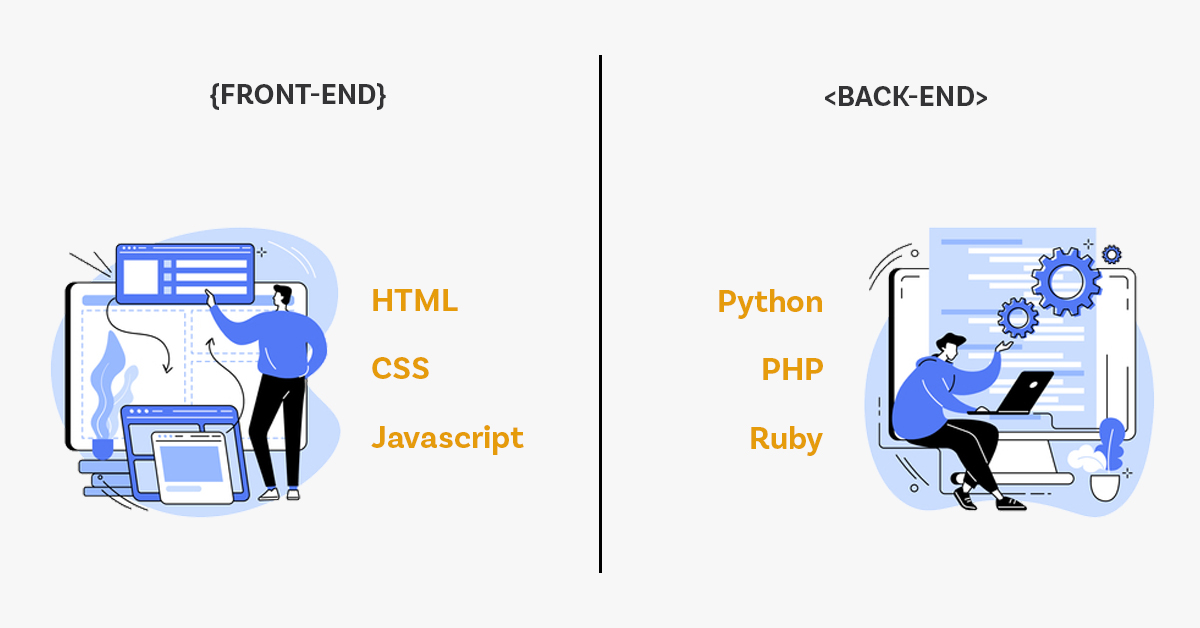 They use JavaScript, CSS, HTML, and most recently, React.JS for front-end development.

On the other hand, backend development is another part of any web or mobile app. It is the backend where the magic happens. Though it remains invisible to users, it is the backbone that empowers the app.

Hence, it is very crucial that you choose the right backend technology for your web or mobile app.

Developers use many tech stacks for backend development such as programming languages, different frameworks, libraries, and others.

It is the developer who will determine the right blend of backend technologies for a particular project.

JavaScript and Python are the most preferred backend programming languages by developers. JS vs Python for backend development has always been a hot topic amongst developers.

In this post, we will discuss why you should go for Python for an AI-powered project’s backend development. 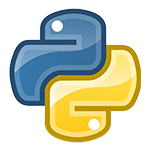 Python is also called an intelligent programming language as it focuses on two major things- RAD (Rapid Application Development) and DRY (Don’t Repeat Yourself). Also, when you want to glue or connect two existing components, can rely on Python.

In addition to that, Python also has large community support for Python developers. If a Python developer finds any issues or problems during the development process, this community and online forums come to his rescue.

Python is easy to learn, highly scalable, and adaptive. Due to such reasons, it has become one of the fastest-growing languages for web or mobile development worldwide.

Go for Python for backend development if you want to develop a smoothly-running, scalable, versatile, and robust web or mobile app.

Apps create powerful AI and ML algorithms based on your behavior and send you recommendations that you cannot ignore.

These intelligent technologies are nowadays seeping into almost all aspects of our lives. Alexa, our personal assistant, is also based on AI and ML. They have changed the way we shop, study, and entertain.

Almost all industries are nowadays building apps that are powered by AI and ML to make data-centric decisions, improve their processes, and reach out to their audience in a better meaningful manner.

Businesses are collecting a huge amount of data from different sources. This data has become the lifeblood of any business.

Technologies such as AI and ML can analyze a massive amount of data, drive patterns, and put critical and important insights on the table.

You can get a competitive edge by utilizing this data to drive revenues and profits. If you want to leverage the unleashed potential of these technologies, you need to develop an AI app.

When it comes to choosing the programming language for an AI app, there are many options such as Scala, Julia, Lisp, Java, C++, JavaScript, and others.

Now, when you are looking for all these qualities in one programming language, Python is the right answer.

In addition to that, you need to remember that AI apps are not just traditional applications. AI apps are research-based apps that will need more data collection and predictive analysis.

Hence, you need a language that is versatile, intelligent, flexible, and highly stable.

Again, Python is the right answer for all these qualities.

Python is simple, easy to learn, and has a consistent syntax. Also, it is a platform independence language that has a giant set of libraries. With Python, developers can perform multiple activities simultaneously.

Here is a list of 10 reasons why Python is the right language for the backend development of an AI app project. 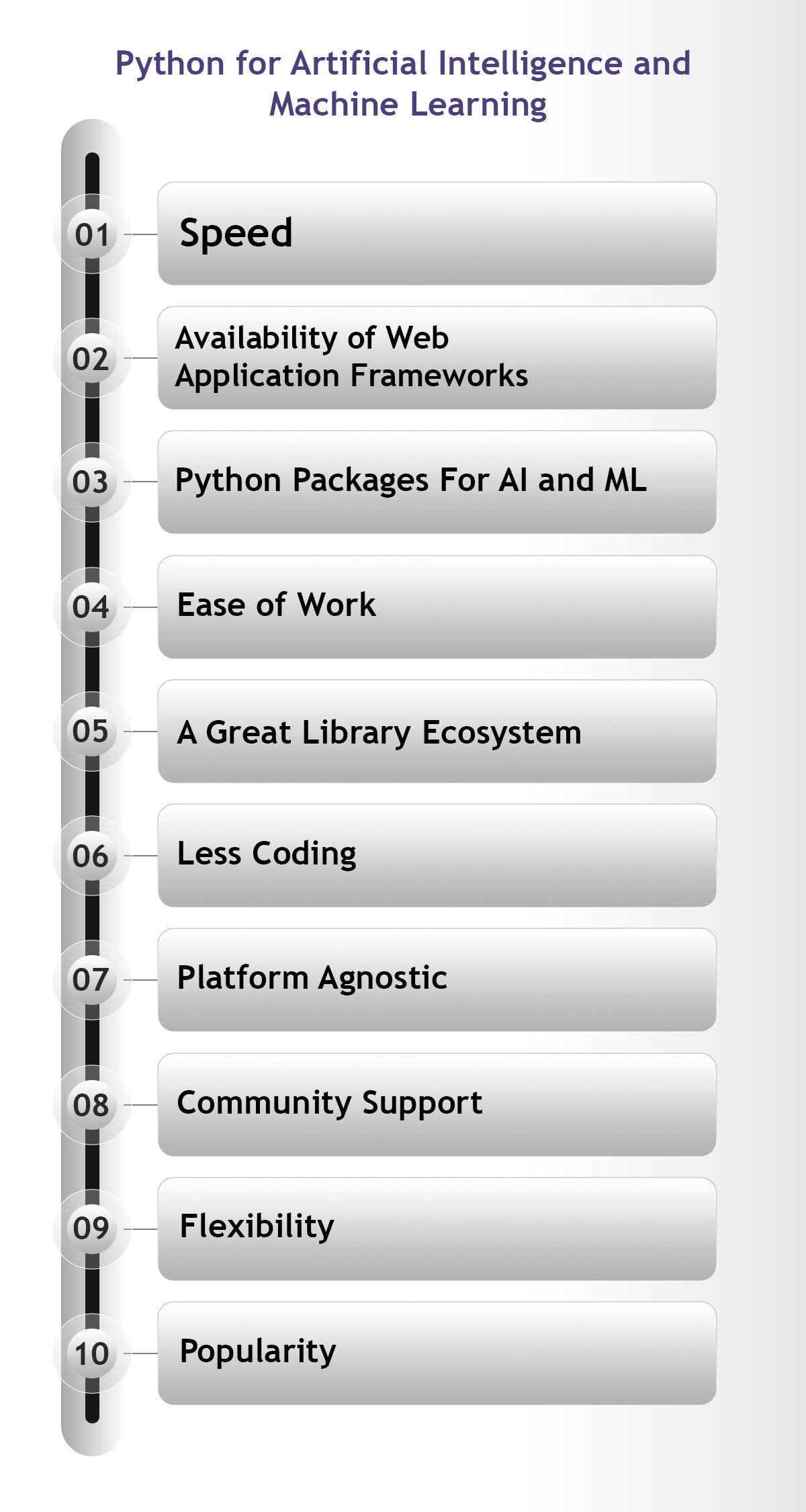 One of the key things you need to worry about while developing an app is speed and performance. Having a high-performing app will turn things in your favor.

The best thing about Python is that it is an object-oriented language that offers much versatility to execute commands. When it comes to performance and speed, Python conquers all.

Python offers a wide range of resources to developers to develop highly versatile and data-driven AI apps. When it comes to JS vs Python for backend, Python wins due to its frameworks.

Some of the best frameworks you can use for backend development are listed below: 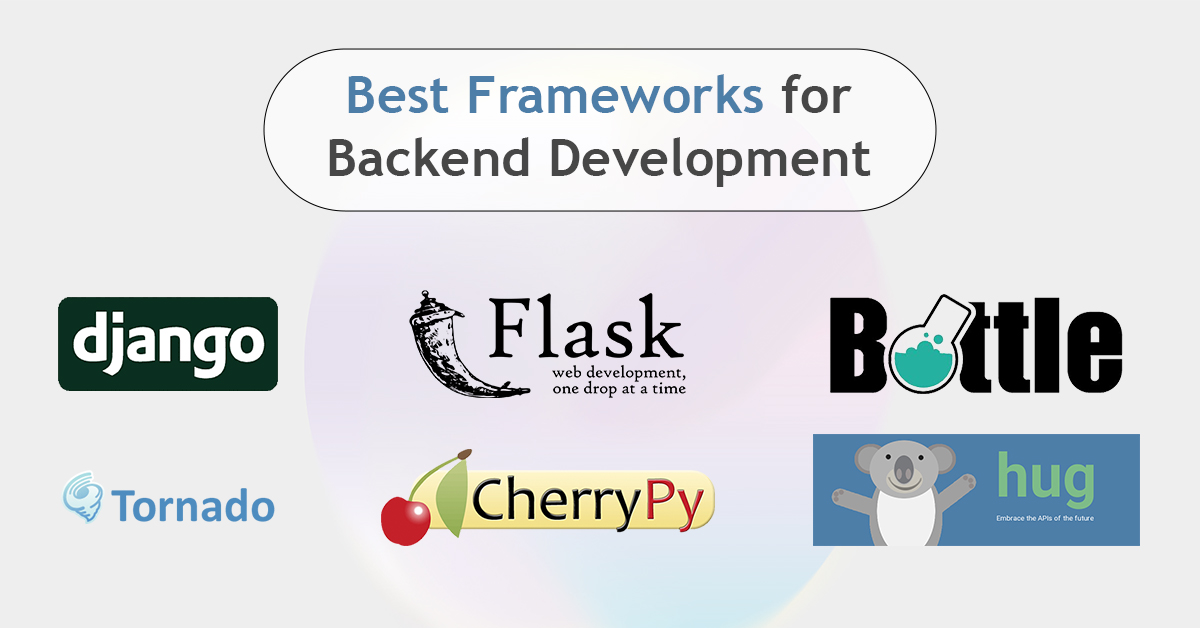 Django was developed by Python developers and it is one of the most preferred and used frameworks for web and mobile app development.

The best thing about Django is that it is aimed at using automation when developers want to speed up web development. It is highly secure, versatile, and offers excellent speed for development.

Flask is another Python web framework offering developers a wide range of web app development tools. Furthermore, it is also not dependent on any external libraries. It is easy to learn and has a highly flexible framework.

It is also a micro web framework like Flask and is easy to customize and integrate. It is dependent on the Python Standard Library and can be useful to develop simple web apps.

It works as a web app framework and also as an asynchronous library. Developers can use Tornado to build long polling and WebSockets.

CherryPy is an object-oriented web framework that is highly fast, stable, and highly versatile for web app development.

3. Python Packages For AI and ML

There are various ready-made Python packages available to develop high-end AI apps. Some of them are listed below:

As the name suggests, NumPy is a general-purpose array-processing package that has a large collection of mathematical and numerical functions. It can handle a wide range of mathematical formulas and random numbers, including linear algebra, and Fourier transforms.

If you want to develop an AI and ML-powered app, you need to add features that can handle scientific and analytical computing. So, Python developers named Travis Oliphant, Eric Jones, and Pearu Peterson developed a resource library called SciPy.

Welcome to Scikit-Learn, a unique Python module that has a large number of supervised and unsupervised algorithms for Python app development. In addition to that, this library can also be used for data mining and data analysis.

It has a highly flexible architecture and it can run smoothly and efficiently on various platforms such as CPUs, GPUs, and TPUs (Tensor Processing Units). A TPU is a hardware chip that is built for machine learning and artificial intelligence capabilities around TensorFlow.

Keras is an open-source library that is highly beneficial for AI and ML app development. It can run on top of other Python packages we have discussed earlier such as TensorFlow, Theano, Microsoft Cognitive Toolkit, and others. In addition to that, it can run on CPU and GPU as well.

It is also equipped with a few features for images and text images and can collaboratively work with neural-network building blocks. Furthermore, it also supports convolutional and recurrent neural networks as well.

Some more Python packages available for developers are Pandas for data analytics and seaborn for data visualization.

Python has a simple learning curve. This works in favor of Python. In addition to that, it has a very simple syntax.

All these qualities combined make Python an easy-to-learn and easy-to-work programming language.

It becomes an ideal answer for backend development due to its consistency and simplicity. Its extensive set of libraries and frameworks saves time and effort for developers.

Full stack Developers can deliver apps on time and offer a competitive edge to their clients.

This is the most important reason why developers choose Python for backend development for AI-based apps.

A library is a set of modules that have pre-written code that allows developers to use it directly. It also allows users to perform certain actions on the app.

Python has a wide range of ready-made libraries for developers to use. Developers don’t have to code base-level items from the beginning of the project. 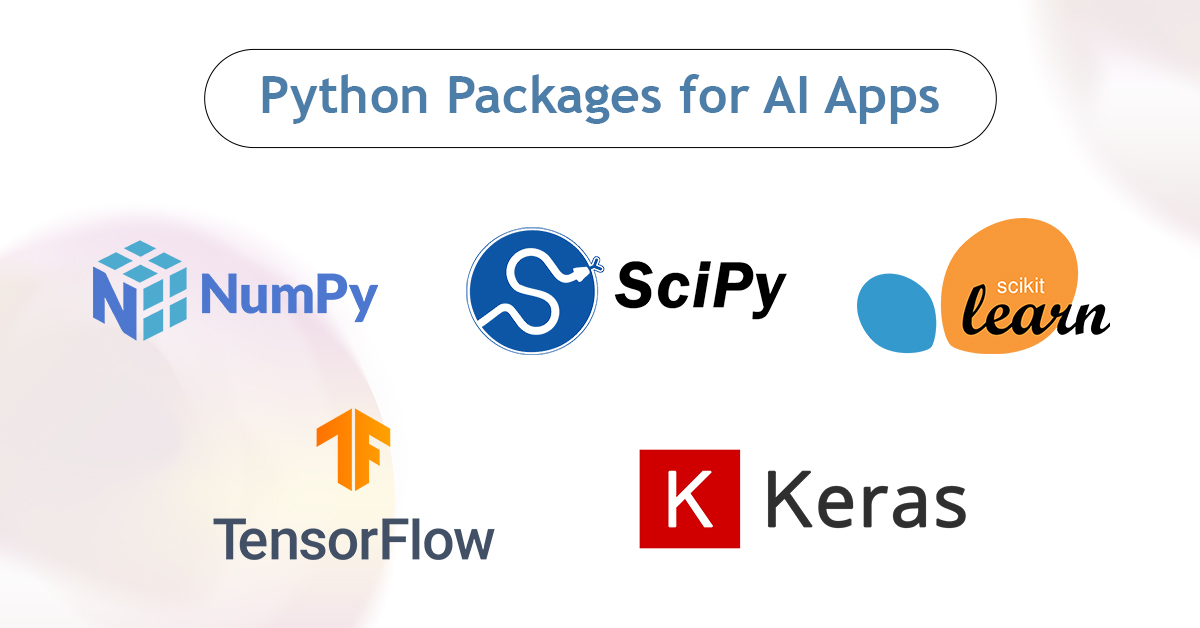 This library allows developers to handle functionalities such as clustering, linear, and logistic regressions and classifications.

It allows developers to do quick prototyping and quick calculations.

Developers can set up, train, and use artificial networks with massive datasets.

It is used for features such as natural language processing and recognition.

It is used for image processing if you have images in your data.

It is a library that is used for deep learning. You can process more than 60 million images a day with this library.

This library is developed to create statistical algorithms and explore data gathered from various sources.

Artificial Intelligence involves a wide range of algorithms. Writing code for such technical algorithms is quite challenging, but Python makes it easy with a set of libraries.

Python allows developers to implement the same logic with less code compared to other programming languages.

It further makes the development time lesser. It is the reason why Python is preferred by developers and businesses.

Python is a platform-independent programming language and therefore, developers can make minor changes in the source code and run applications on different OS.

In addition to that, it also allows developers the flexibility to give an API from the programming language. It is a useful thing for new Python developers with almost no practical experience.

As it is an open-source programming language with thousands of developers across the globe contributing to the community. You can find a large number of resources available online for help.

Also, it has a giant developer community to reach out to. Python developers are keen to help fellow developers at any given time.

Python is highly flexible and versatile. Whether you want scripting or data structure integration for the backend, it is highly suitable for each purpose.

Also, developers can easily check the code in the IDE, which is considered a good point by developers.

Millions of developers love Python. It is one of the most popular programming languages worldwide with huge community support.

Also, it is easy to find experienced Python developers, which is needed for AI-based projects.

Furthermore, Python is an easy-to-read programming language. Developers can easily read and understand code and can change or copy-paste it without any hassles.

There is no scope for any type of confusion and errors here. It makes the data exchange efficient.

Tools such as IPython offers a wide range of features such as testing, debugging, and others to quicken the development process and mitigate errors.

AI and ML-based apps are more scientific and analytical apps, requiring an intelligent programming language with libraries and frameworks.

Python is one of the most versatile, flexible, and easy-to-work programming apps that can lead to robust, tailor-made, and secure applications.

It is the best choice if you are looking for an ideal backend programming language. It is platform-independent and is an easy-to-read language that also offers a wide range of visualization options to data scientists.

Undoubtedly, Python is the best choice when you compare JS vs Python for backend.

You can hire expert Python developers from Expert App Devs, a Python app development company with a proven track record and a team of the best technical brains.