Top 15 Reasons to Use Unity 3D for Game Development 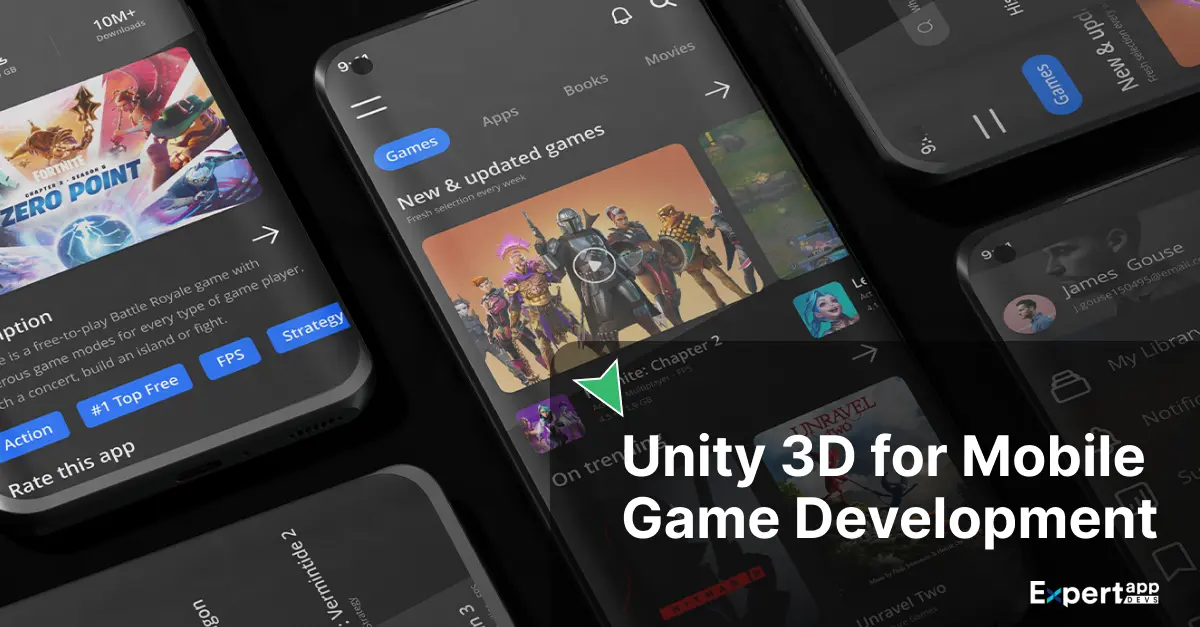 Unity 3D is a trademark of Unity Technologies, which provides an all-in-one platform for making mobile games. It has received a lot of attention from the gaming world due to its unique features, low costs, and great gaming skills.

Using it as a tool to build games that can run on several platforms saves developers the time they would otherwise spend developing games for each device separately. However, before making a decision, it's important to weigh its advantages and disadvantages.

The Unity Game Engine was utilized to build the top 34% of all free mobile games that are now accessible on the Play Store and the App Store.

71% of the finest 1000 games ever produced were built using Unity and were played on mobile devices (source:investors.unity.com).

Unity 3D is a fantastic gaming engine for creators that offers a wealth of features and gameplay options. Consider utilizing the Unity 3D game development platform to develop an interactive game that is both fascinating and excellent in its own right. Developing a gaming application will get easier as virtual worlds come to life.

A Brief Introduction to Unity

Unity is one of the most popular high-end game engines on the market. For video game programmers, it's a breeze to get up and running. To a considerable extent, the growth of Unity's fan base may be credited to the attractive design of the game engine.

In 2020, there were 2.8 billion monthly active users participating in activities related to material that was run or generated using the Unity Game Engine.

The usage of Unity eliminates the need for developers to switch between platforms. Moreover, Unity's user-friendly interface makes it easy to create game instructions. In a nutshell, this engine makes it possible to create high-quality games that load rapidly. 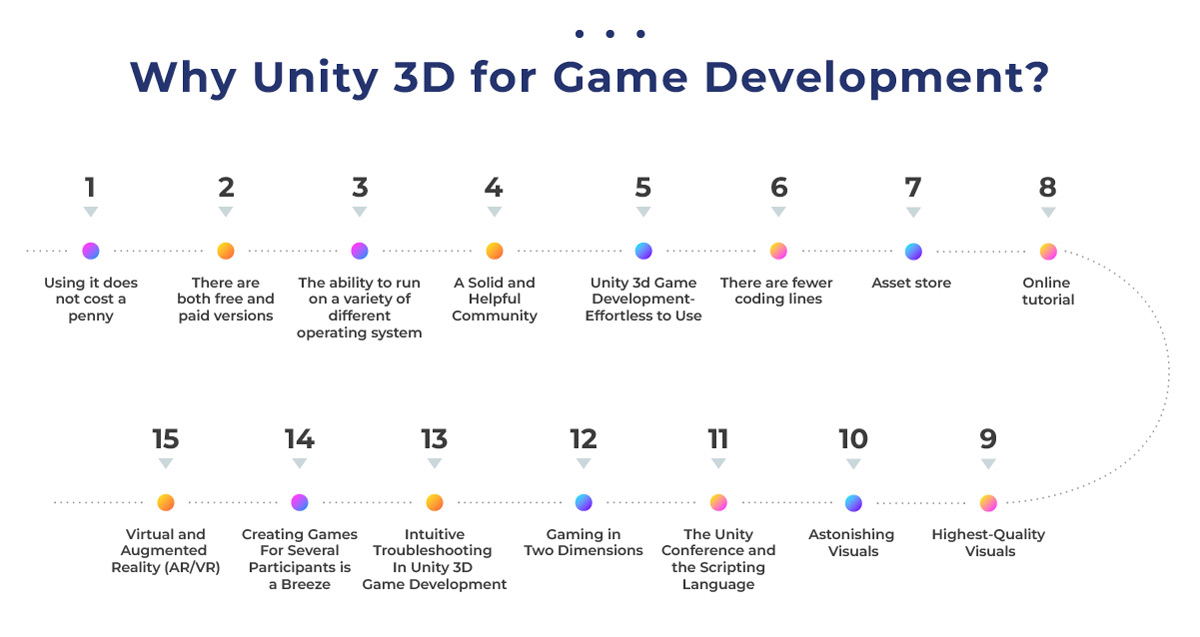 1. Using it does not cost a penny

Both the free and Proform versions of Unity 3D have the same functionality and can be installed in the same way. To focus on specific areas of the game, one may choose to play in a free-form manner.

It's also possible to employ the Proform's distinctive emphasis spots when creating games with high-end features like a stereo sound channel, playback, or even a 3D composition booster. All types of game developers may now build full-version games using Unity for no extra cost.

2. There are both free and paid versions

The free and premium editions of Unity provide a broad range of extra features and functionalities. You may choose the free version, which provides an overview of the essential elements. For high-end games, you may utilize features like feature playback, 3D composition booster, and sound channel in the pro version.

You may use the free version to get your ideas off the ground if you're new to software development. On the other hand, selecting the pro-business plan will provide you access to more features.

3. The ability to run on a variety of different operating systems

94 of the top 100 development studios in terms of total income are now using Unity as their platform. (Source: unity.com)

Steam, iOS, Android, PCs, and Macs are just a few of the platforms that Unity can run on. Unity may be used on consoles as well.

You may create games for several platforms and stages using Unity, which makes it easy to create a wide range of games.  Allows for the movement of critical elements from one level to the next, enhancing gameplay and making it more memorable.

4. A Solid and Helpful Community

The team of software developers at Unity is always here to help. Today, nearly 2.5 million developers utilize the Unity programming environment. This figure continues to rise. Clients' approval or disapproval may be transparently communicated to the development team to speed up issue solving.

Contrary to popular belief, the unity 3d game development platform is not inherently difficult to use. This should be considered while considering whether or not to use it.

Using this machine is a breeze even if you don't have access to an instructor. It's not hard to understand the variety of material, ideas, and gameplay if one is acquainted with the platform's peculiarities.

6. There are fewer coding lines

Because you don't require much prior coding knowledge or experience, it's ideal for those who are just getting started in the game development industry or want to begin a new hobby. A game creation platform called Unity may be used with C#, JavaScript, and Boo, among others.

A game may also be made without writing any lines of code whatsoever. However, those already familiar with coding may use widely available educational programs and documentation.

Everything a game developer needs to make a game can be found in one place at the Unity Asset Store. It's easy to use and doesn't get in the way of creating characters, backdrops, and buildings, among other things, for game developers.

It is also possible to earn more money via the asset store for artists like musicians and sculptors. This is true for all three of these vocations listed above. Consequently, the store has a wide variety of ways to make money.

If you're a novice video game programmer, you won't have trouble finding free Unity3D tutorials since they have been around for over a decade. Even though most people outsource game development services rather than build their games, it is crucial to underline how easy it is to get started with Unity3D development.

The Unity game engine is a good choice for making mobile games since it supports high-quality images, audio, and video. A wide range of monitors and devices may be used with little to no loss of clarity or distortion in the pictures.

Visually, Unity is on par with more expensive tools when it comes to high-quality visual effects. In addition to many user-friendly features, the game engine offers an entirely customizable rendering approach, allowing developers to build games with stunning images.

There are several instructions and tutorials accessible online that explain how to create natural-looking and fluid movements of objects in 3D games.

11. The Unity Conference and the Scripting Language

C# or JavaScript may be used to write the scripts for a Unity 3D game's game engine. You can get up and running quickly with these programming languages since they are easy to pick up and use.

For those interested in video games, there is a meeting called Unite for Unity 3D game development company that takes place once a year. Attendees will get the chance to discuss the latest developments in the video game business while networking with like-minded individuals.

Unity is mainly used to create 3D video games but also contains facilities for creating 2D video games. With the most current version of Unity, game development companies may more easily build 2D games thanks to a 2D engine and many assets. Developers may now create 2D games that can be played on various platforms, including gaming consoles, personal computers, and mobile devices.

The Unity engine's basic and intuitive development interface makes it simple to create gaming apps quickly. When working with the Unity 3D engine, game development companies may perform rapid debugging in the runtime.

14. Creating Games For Several Participants is a Breeze

The Unity game engine has made some of the best multiplayer games. The truth is that the platform allows developers access to a vast range of capabilities, making it more straightforward to create mind-boggling games that people across the globe can play.

Solstice Arena, a game with a large fan following, is one of the most popular and entertaining online multiplayer games. For video game makers, Unity gives a big community the backing to deliver popular multiplayer entertainment as they build it.

Unity's 2D game production platform has been available to specialists since November last year. Until recently, Unity was only capable of creating 3D games.

More than half of the mobile gaming market is powered by Unity, which Unity 3D game development company uses to make the most financially successful games. More than 60% of all augmented and virtual reality material has been created using Unity.

Using the Unity 3D engine to create mobile gaming apps has several benefits. The machine works just as well when used to develop games for other platforms as it does when used to create games for its own.

Unity 3D game development company typically encountered difficulties when debugging code in the past, but Unity's most recent version aimed to alleviate these issues. On the other hand, its excessive memory use might present problems for app developers and end-users alike when using mobile devices.

An extra set of challenges is faced while creating a visually intense gaming app, most of which are inevitable. On the other hand, the engine is well-suited for creating mobile games on a small to medium scale. These apps may incorporate intriguing features like AR and VR compatibility and 2D and 3D effects.

For cross-platform AR/VR apps, mobile games, and games for the consoles, Unity is an excellent choice. Rather than requiring a deep understanding of programming, it allows for quick and easy development of 3D visuals with little effort.

Programmers may utilize Unity to create 2D and 3D video games in a user-friendly, high-quality, and realistic environment. Because of this, Unity will appeal to game creators because of its simplicity, which is rare among game production tools.

Three to six months is the little time needed to become skilled in the instrument. The amount of time it takes to finish a job will be reduced if the developer and the coder have prior Unity expertise.

This is because they will be able to expand their knowledge of the tool and become more efficient in using it. As a result, before commencing work with Unity, professionals should have a good grasp of the C# and JavaScript programming languages.

Our mobile game developers use Unity 3D technology to build 3D games and apps. The iPhone/iPad and Android-based smartphones and tablets can run these games and apps.

Whether your objective is to turn your idea into an engaging game or to minimize the time it takes to bring your app to market, we're here to help you make the most of this highly functional platform. Your brilliant idea may become a reality with the aid of our top-notch Unity 3D game development services.