Swift vs Flutter - Which is Better for Your Next iOS Application? 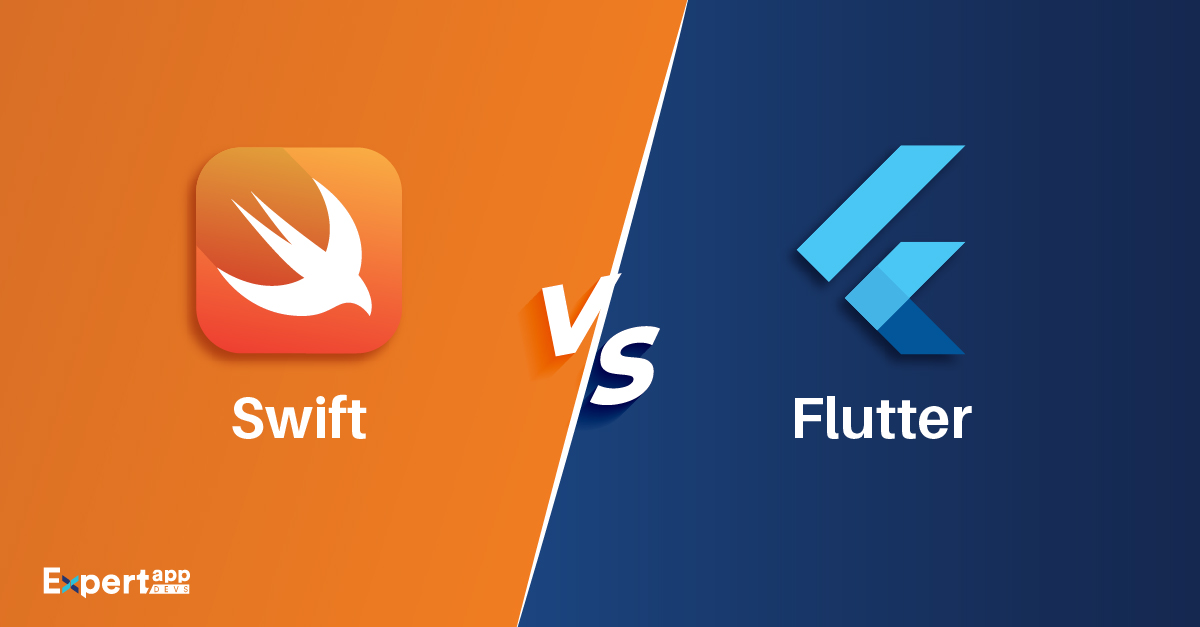 Behind every successful application lies a robust development approach, strong coding methods, and the ideal technology stack. The programming language used to code the business application is one of the biggest rocks supporting your business's mobile app development requirements.

In iOS app development, you should give equal importance to the application's performance, quality, and app store requirements. Having a programming language in your tech stack that makes up for the intuitive frontend and flawless backend requirements is essential.

Swift is the iOS programming language, while Flutter is a UI toolkit developed to devise smooth frontends. However, these languages/toolkits have been battling fiercely for the developer's attention and a place within the tech stack.

This blog will look at the key features of swift and Flutter. We will also take you through a comparative analysis of Swift vs Flutter to help you understand which one works and in which situation.

Swift is a high-level programming language developed by the open source community in collaboration with Apple. It is a multi-paradigm and general-purpose language that works with both Cocoa and Cocoa Touch frameworks.

The language was more of a replacement for Objective-C to help improve the developer’s productivity and streamline development.

Check out the key features of this programming language that will help you understand its abilities better. 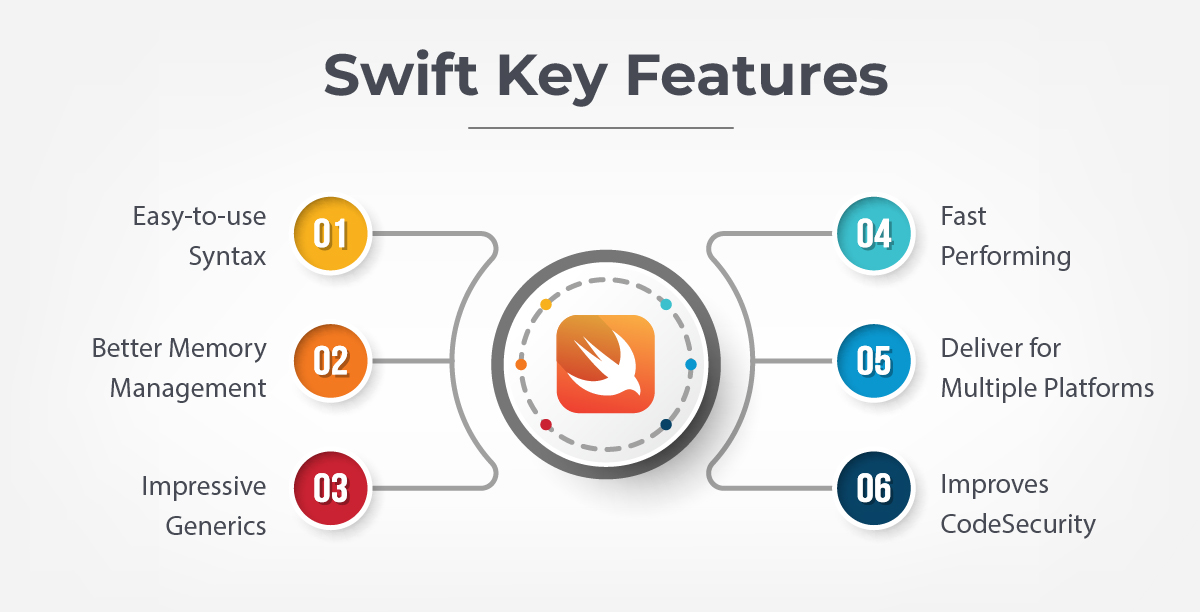 Pros and Cons of Swift

It comprises an SDK with all the tools needed to develop an application for iOS and Android. The framework includes reusable and extensive UI elements that help build interfaces quickly. This framework is built using Dart programming language (another Google-backed language), which has undergone several changes and improvements since its inception.

With Flutter, you can not only build applications but also test and deploy them with ease. 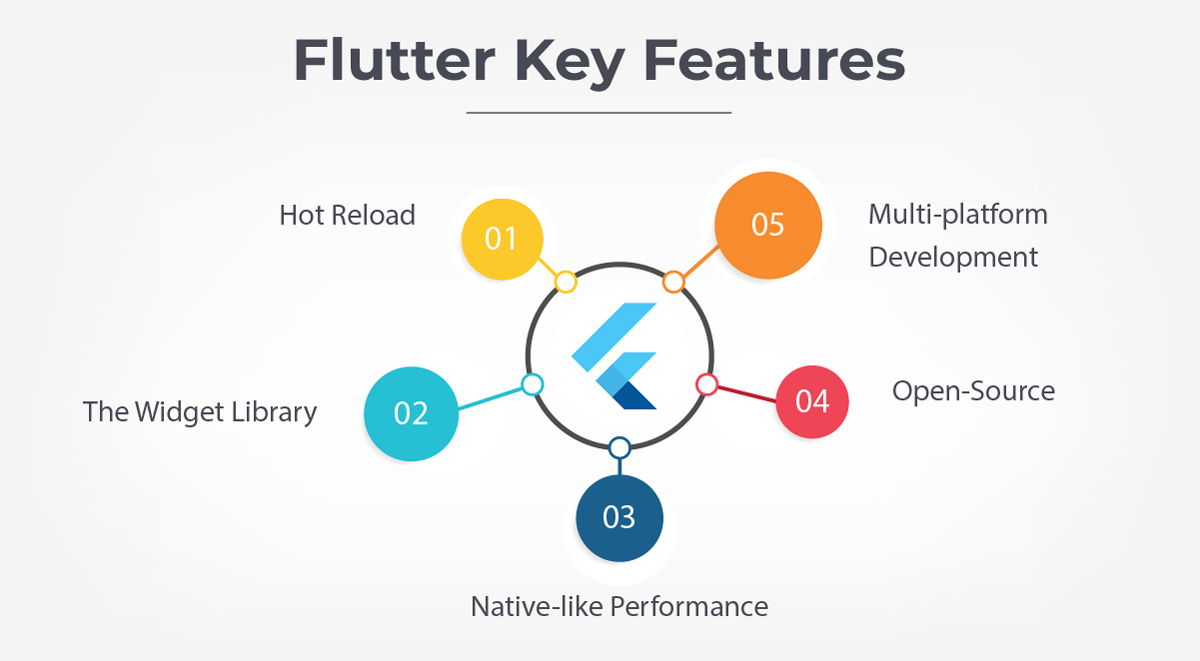 A quick look a the pros and cons of Flutter to know when you should hire Flutter developer for your business app.

Pros and Cons of Flutter

Comparison between Swift and Flutter for iOS

Explanation: As it can develop applications for iOS and Android simultaneously with minimal effort and maximum outcome, you can get the basic version out within a few weeks. You can then keep adding features, which help get an edge over the competition. It is best to hire Flutter developer if you want to accelerate the app launch.

Explanation: With a single codebase, you can create winning web and mobile applications for multiple platforms, while keeping the performance, quality, and native-like appeal intact. Hire Flutter developer for better reusability and simple app development.

Explanation: Apart from clean builds, the underlying Dart engine proves to be a boon for Flutter. It offers the exceptional speed that the iOS or Android app needs when starting up. Hire Flutter developer if you want to increase the speed of development.

Explanation: It is a native programming language that follows the syntax and design guidelines directed for iOS. As a result, it will deliver more quality and performance.

Explanation: With more developer support, better UI abilities, and thorough documentation, it is definitely more popular for app development as compared to Swift. It allows developers to create applications for multiple platforms simultaneously. Hire Flutter developers as they are more accessible and easy to hire.

Explanation: As it is a native language, it comes with all the pre-designed elements that make the syntax smooth and efficient. Flutter, on the other hand, would need to integrate third-party programs and components to make the code appear native-like.

Explanation: You don’t need to develop the native-like UI/UX elements from scratch, which saves a lot of your time. Additionally, the elements appear to be similar to how they would if developed using native programming languages. So, clearly, the winner is Flutter in Swift vs Flutter.

Explanation: Most of the heavy lifting is done by Swift in the case of iOS while, it is done by the framework and its UI in the case of Flutter. In Swift vs Flutter, you will be able to develop apps faster with Flutter.

Explanation: As it is an open-source framework developed by Google, it enjoys more community support and establishments than Swift.

Explanation: You don’t need to invest in separate resources, teams or tools to develop applications for Android and iOS.

Explanation: As it is a slightly mature language when compared to Dart, and preferred among iOS developers, it is easier to find Swift developers for your requirements.

Explanation: The swift apps are relatively lighter and the bandwidth occupied is less compared to Flutter. You should go with the iOS app development service if you want to reduce the size.

Explanation: Both Swift and Flutter offer excellent testing capabilities that allow you to ensure quality and high-performing app solutions.

Explanation: The syntax is better with Swift, and encrypted. It is driven by Apple guidelines, which is why changes cannot be made with ease to its features. You should hire Swift developer to induce better security in your application.

Explanation: Being a native language, it gets the version updates and upgrades immediately when compared to Flutter. If you want instant updates and better upgrades, hire Swift developer for your next application.

Explanation: Swift can be used for advanced gaming and regular mobile applications. Owing to its security, it can even be used for complex enterprise mobility solutions.

1. How to choose a programming language for your app development needs?

When choosing a programming language for your requirements, consider the following factors

2. What is the process to hire Swift developer for the next business app?

3. Which is better React Native, Flutter or Swift?

4. Is Dart easier than Swift?

Swift is a mature language that offers accessibility and better integration with native components. The learning curve for both languages is almost similar. They offer different opportunities to the developer and help deliver capable app solutions. Dart is easy to execute through the Flutter framework and helps provide Android and iOS apps simultaneously. Depending on the requirement, you can hire Swift developer or a Flutter development team.

When you sit to compare Swift vs Flutter, you are comparing it with Dart (the programming language for Flutter). While it is still in the nascent stage, it has developed to offer the developers more ease of programming and extensive capabilities. This article took you through the key features of Swift, such as ease of syntax and automated memory management. We also saw how hot reload and the widget library help with Flutter programming.

We detailed the pros and cons of Swift and Flutter. Swift is more reliable in terms of performance and security; however, Flutter aces when it comes to building speed and the ability to accelerate time-to-market.

We can deliver your mobile app dream at Expert App Devs using the best technology stack combined with apt design and logic. As a leading iOS app development company, we have expertise in both Flutter and swift and add them to the stack depending on the need of the mobile app. If you want to develop a capable app solution, hire Swift developer or a Flutter team by filling out the contact us form. We will get back to you with the right solutions for your requirements.